There’s one recipe that is passed down through the generations in my family: oatmeal chocolate chip cookies.

It’s such a simple recipe, and yet, it creates the most delicious cookies, but after years of baking them in a multitude of states, jobs, ovens and countries, I have found a few tips, tricks and tweaks to make them just a little bit better.

There is one caveat with my cookies. They’re not pretty or picture perfect. They are delicious.

I first started perfecting the recipe when I lived as an au pair in Dresden, Germany. While my German guest family had heard of cookies, nothing like the American confection existed.

These oatmeal chocolate chip cookies, which I lovingly refer to as German slayers, took them by storm.

In addition to being an au pair, I was also going to a language class every day with students from around the globe, including Europe, Asia and the middle east. To most of them, the cookies were a novel experience.

Baking these cookies in Germany was a lot harder than should be expected. Brown sugar didn’t exist so I had to substitute molasses, since there were no chocolate chips I had to cut them off of large blocks of baker’s chocolate and imitation vanilla came in tiny vials.

White flour, too, was complicated. Germans have plenty of flour but plain white flour is not one of them. Eventually, I shifted my flour use to whole wheat, which is the first change I’ve kept.

Next, I experimented with spices to match the cookies to the hot mulled wine served in winter called Glühwein. That included ground cinnamon, nutmeg, ginger and other spices. In this recipe, I’ve listed them as optional. After I came back stateside, I started to add shredded coconut.

Next on the big list of tips is to freeze the batter before baking it. This helps the cookies retain a rounder shape when baked. When taking them out of the oven, they may seem a little undercooked, but once they cook down, they will be nice and soft. I’m also a full convert to the use of parchment paper on baking pans. I don’t know what I would do without it.

Last, I stress that the flour and baking soda should be mixed together before being added to the rest of the batter. That makes mixing everything evenly that much easier. 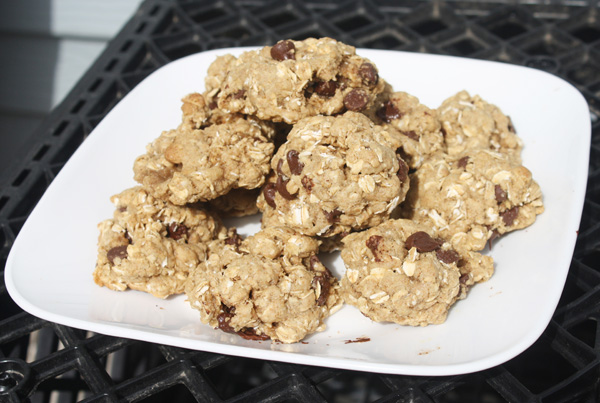 Wheeler Cowperthwaite/Nevada Appeal
Whole-wheat flour lends these German-slaying cookies a nuttier flavor and a false sense of being healthy to eat. 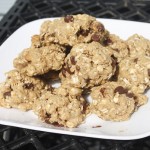 Use parchment paper instead of greasing the cookie sheet. Spices will make the cookies taste . . . spicy. Whole-wheat flour gives the cookies a slightly nutty flavor and more texture, but white flour can be used as well. Refrigerating or freezing the dough keeps the cookies from flattening in the oven. The more oats, the better!